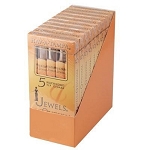 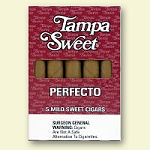 They don't make Hav-A-Tampa cigars in Tampa anymore. They make them in Puerto Rico. But the venerable brand that began at Tampa in 1902 keeps on smoking along in the 21st Century.

Hav-a-Tampa was one of the few early cigar companies that was totally American owned. Using the name of the city in the cigar brand name also helped make Tampa known as Cigar City. It's signature line went, "Won't you Hav-A-Tampa cigar?" The company introduced its signature Tampa Jewels cigar in 1931. They were sent to military bases around the world.

Hav-A-Tampa produced several additional name brands including Tampa Sweet, Tampa Nugget and Phillies. The Hav-A-Tampa factory was a nondescript Riga Boulevard building east of Ybor City. The company became the first to bring machines into the cigar-making business. It revolutionized the business "for good or bad, depending on who you ask." said the curator of the Tampa Bay History Center, Rodney Kite-Powell.

By 1996, the company had sales around $140 million from 859 million cigars made annually by 800 employees in Tampa and Selma, Ala. The company was sold in 1997 to Tabacalera. That company is the largest tobacco enterprise in Madrid, Spain. Tabacalera merged with a French tobacco leader in 1999. The newly formed company was called Altadis S.A. That company consolidated cigar-making operations. Their American cigar manufacturer based at Tampa was incorporated as Altadis U.S.A.

Imperial Tobacco of England bought the U.S. cigar operation in 2008. Closing the Tampa Hav-A-Tampa factory in 2009 left only one cigar factory in all of Cigar City Tampa. That was the J.C. Newman Cigar Co. The company has 150 employees.

Hav-A-Tampa continues to be a trendsetting brand with a great smoke. Stemming from a long history including the machine rollers, the cigar is inexpensive and a great alternative to overly-priced hand-rolled cigars. Since they are machine made, cutting costs are cut accordingly. This means heady cigar smokers get the most quality for their hard-earned money, more sticks to the dollar.

The Have-A-Tampa also is known as the first to employ a wood tip. This gives the lips and mouth a more dynamic feel. The brand is the largest wood-tipped cigar seller on the planet. It's a great cigar that burns with a sweet wood smell thanks to the unique tip, reviewers say. This gives the leading Hav-A-Tampa brand today, the Jewels, a mellow taste considered unique in today's cigar market.

Tampa Sweet Perfecto
$26.99
Out of Stock

Copyright © 2021 Pine Cigars. All Rights Reserved. THE SALE OF TOBACCO PRODUCTS TO PERSONS UNDER THE AGE OF 18 IS AGAINST FLORIDA LAW. PROOF OF AGE IS REQUIRED FOR PURCHASE. Pine Cigars does not sell Cigarettes or Pipe Tobacco. This website and its use is intended for people over the age of 18. We sell Cigars, Filtered Cigars, Premium Discount Cigars. By Visiting our site you agree to our terms and conditions of purchase. Clients are responsible for their state and or local taxes in their state. By entering our site you agreeing to be 21 years of age or older and of legal smoking age in the state where You! live. I also acknowledge that some products on this site contain nicotine and I am willingly purchasing a product that contains nicotine. Your age will be verified at time of checkout and if you are not of legal smoking age in your state your order will be declined.